Why Did Jesus Need Help with His Cross? 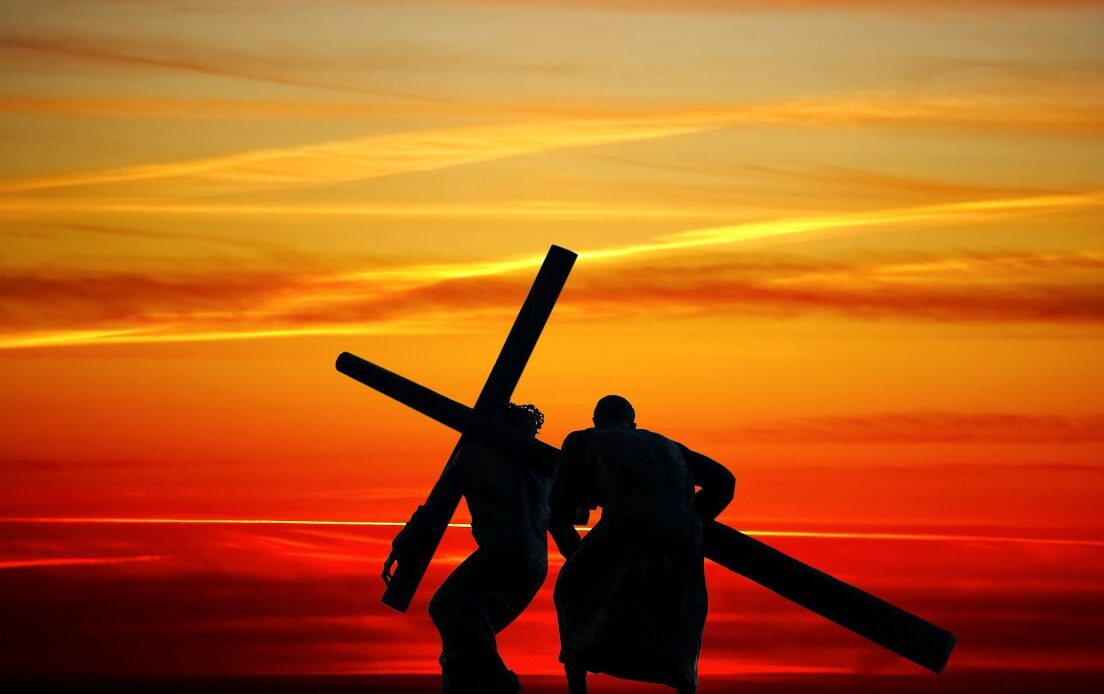 Each year around springtime, your mind drifts to images of Passover and the death, burial, and resurrection of Christ. As the earth bursts forth with new life, you remember Jesus’ sacrifice on Calvary for the forgiveness of sin and eternal life. Remember that you can’t have a glorious resurrection unless you have the heartbreaking death and burial.

Jesus’ Last Passover with His Disciples

To better understand the ultimate price that Jesus paid on the cross, you must consider the setting, action, and characters surrounding the hours beforehand. The Gospels agree that Jesus and His disciples celebrated the Passover together in a borrowed upper chamber. He sent Peter and John to make all the preparations for the evening, according to Luke 22:8.

As a renowned Jewish teacher, Jesus followed the Laws of Moses and observed the Passover Seder as his fellow Jewish folk. Nowhere in the Gospels does Jesus do away with any Jewish festival, let alone the most sacred one of Passover. He and the disciples followed the unleavened bread, lamb, wine, bitter herbs, and saltwater traditions.

However, Christ chose this final Passover service with His disciples to reveal what it all represents. He was the spotless Paschal Lamb that would be sacrificed for the world’s sins. The unleavened bread represents His pierced Body that would be broken for all. The sip of wine in the New Testament was His shed Blood. During this highly emotional last supper, Jesus fulfilled the old prophecies that would culminate in His death.

The Last Supper to Christ’s Arrest

Usually, a solemn, relaxing Passover meal for Christ and His disciples became a tsunami of emotions. Not only had Jesus announced that He was soon to be crucified, but He also said that one of them would betray Him that very night. The shocked disciples were all asking if the betrayer was them and trying to process that their loving Master would die soon.

As the narrative continues, Satan entered Judas Iscariot’s body, and he went out to receive the 30 pieces of silver for handing Jesus over to the Jewish authorities. Meanwhile, Christ and the other 11 disciples were in the Garden of Gethsemane, so the Lord could pray. The flesh of Christ wanted to pass the bitter cup of sin, but He submitted to God’s Will. Each time He came back to check on the disciples, they were sleeping and weren’t praying.

How lonely and rejected the Lord must have felt at that time. Nobody cared to comfort Him in His darkest hour and help shoulder the burden. In Luke 23:47, Jesus was urging His followers to pray and resist temptation. At that moment, the wheels of His final destiny were put into motion.

The vile and greedy Judas Iscariot appears with a military mob loaded with torches, swords, and spears. Like the snake that he was, Judas approached Jesus, saying “Hail, Master,” and kissed His cheek. Even though He knew Judas was betraying Him, Jesus still called him a friend. He asks Judas if He would betray the Son of Man with a kiss.

The domino effect started from there as Jesus was quickly arrested while His followers ran to hide. Once again, the Lord fulfilled an old prophecy, this time in Zacharias 13:7. When the Shephard is smitten, the sheep will scatter.

Chaos in the High Priest’s House

Jesus’s first stop after his mob arrest was the house of the high priest, Caiaphas. On the surface, the Jewish leaders portrayed Jesus as a blasphemer for calling Himself the Son of God. However, they were secretly jealous and were afraid that He would gain the people’s confidence and usurp their authority.

While in the halls of Caiaphas, members of the council and other authorities blindfolded Jesus. They smacked, punched, and spat on Him while mocking him. They laughed and told Him to prophesy who had hit him. The whole time, Jesus held His Peace and was silent, like a lamb to the slaughter.

Over the next few hours, Jesus was led through one mock trial to another. The Jewish leaders brought Him before Pontius Pilate, the Roman governor. They accused Him of stirring up the people and committing treason against Caesar. After a few quick questions, Pilate said that he couldn’t find anything Jesus did wrong. He told the Jewish leaders to take Jesus to be tried by King Herod since it was his authority.

King Herod didn’t want to make this decision any more than Pilate. He was angry that Jesus didn’t speak a word in His defense. Herod’s sadistic troops stripped Jesus and wrapped Him in a purple robe to mock his Kingship. They also shaped a crown of sharp thorns and crushed it onto His head. The razor-sharp thorns probably sliced into his scalp, neck, and forehead, causing severe bleeding and unbearable pain.

For the last time, Jesus was returned to be sentenced by Pilate. Once again, Pilate insisted on the Lord’s innocence. In fact, Pilate’s wife sent a messenger to urge her husband that she had dreams about Jesus and to let Him go. Still, the Jewish council pressed for crucifixion.

As a token of compromise, the Roman governor had Christ flogged with a cat-o-nine-tails, a vicious whip encrusted with metal and glass. The Roman torturer tied Jesus to a post and exposed His back. The forty lashes would have ripped the Lord’s back clear to the bone. Most prisoners usually died from blood loss from such gory torture.

The Jewish leaders weren’t satisfied with this horrible punishment and continued to demand that Jesus be crucified. After exhausting all his resources, Pilot reluctantly agreed. However, he publicly washed his hands in a water basin to prove that he wanted no innocent blood on his hands.

Jesus Bears His Cross to Calvary

To make matters even worse, the Romans tied a cross beam across Jesus’ shoulders to carry to Golgotha, the Place of the Skull. It was the notorious mountainside where the Romans performed countless crucifixions. Some Biblical scholars estimate that the route from Pilate’s Hall to Golgotha may have been about a half-mile.

Picture this suffering Savior Who had been violently beaten, kicked, punched, and whipped within an inch of His Life. Isaiah 53:4 foreshadows this sorrowful march to Calvary. As the Lord bore all our sorrows, He was considered stricken and smitten by God. The bloody and mangled figure staggering along the path barely resembled anything human.

In light of some Roman records and other testimonies at the time, many scholars believe that the crossbeam tied across Jesus’ shoulders was probably five to six feet long and weighed between 75-and 125 lbs. Walking a half mile carrying such a weight across the shoulders would be a feat for a robust and healthy person, let alone someone beat to death.

The cruel weight on the Lord’s battered body was too much. Although popular stories and films portray Jesus as falling several times while carrying His cross, no mention of falling is in Scripture. However, it doesn’t say that He didn’t fall, either. It just stands to reason that the Lord was too weak to carry such a burden.

According to Luke 23:26, the Roman soldiers picked out a man in the crowd named Simon of Cyrene. They took the crossbar from Jesus and placed it on Simon to carry it to Golgotha. To this day, Simon of Cyrene is steeped in Christian lore and tradition.

Carrying the Cross of Christ

All that’s known about Simon is that he was from Cyrene’s ancient Greek city, located in present-day Libya. Nothing is known of his past nor what happened after his encounter with Jesus. He was there and willing to help at the moment.

Dear Heavenly Father, Thank you for all your completed with your sacrifice on the cross. Help me, Jesus, to follow the example of Simon of Cyrene and willingly take an unexpected cross and go as You lead. Help me remember that You are my ultimate support in times of trouble and will be an ever-present strength throughout my life. Amen.

bible burden Calvary CRoss Easter Faith Forgiveness Lent Prayer sacrifice Sin weight
14671
52
Share
We use cookies on our website to give you the most relevant experience by remembering your preferences and repeat visits. By clicking “Accept”, you consent to the use of ALL the cookies.
Do not sell my personal information.
Cookie settingsACCEPT
Manage consent